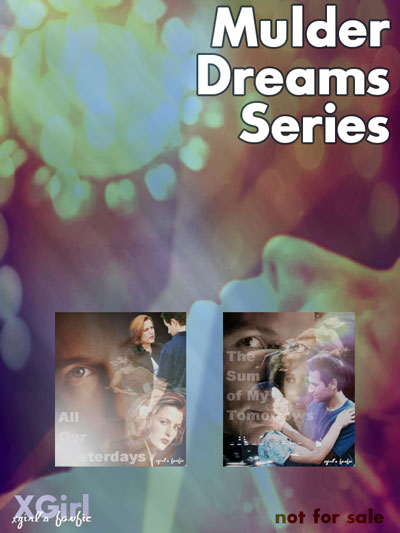 The final pieces of xgirl's Crossing Lines universe.  Note, if you want to think they lived happily ever after at the end of Healing Waters, you might want to reconsider reading this.  It's a bit of a rollercoaster, but it does end up in a good place.  Xgirl does give Mulder his sister back, but it comes at a price.

All Our Yesterdays takes place after Mulder's abduction in Requiem and the premise is that he is having these visions from his past. The first mini story is a "prickly" encounter in the immediate aftermath of The End, when emotions are raw from the fire and from the circumstances surrounding the x-files division. It is the end of that famous run during S5 in which I interpreted much chaos in their relationship, all of it unvoiced at the time. It is the part of the story that provides the requisite angst.
The second encounter is from far more innocent days: Mulder and Scully's first Christmas as partners. No ghosts or mystery gift giving here, just some early UST.
The third part is a continuation of The Unnatural. Didn't you wonder what else was said after "Shut up, Mulder, I'm playing baseball"?

The Sum of My Tomorrows
Is our present defined by our future? This story was dedicated to Mulder, who deserved better than he got in Closure.  As he lies in a state of suspended animation, Mulder gets a vision of a future that involves Samantha.  The relationship in this story is given as "MS friendship post-MSR".  This story is a direct continuation of All Our Yesterdays.  Mulder is still "wherever" he is after being taken at the end of S7.

My headcanon may differ from Xgirl at this part of Crossing Lines, but I'm much happier with her resolution of Mulder's ultimate truth than the crap we were served onscreen.  I'm yet  to find my post S7 headcanon in a story...

The final two dustjackets from xgirl: