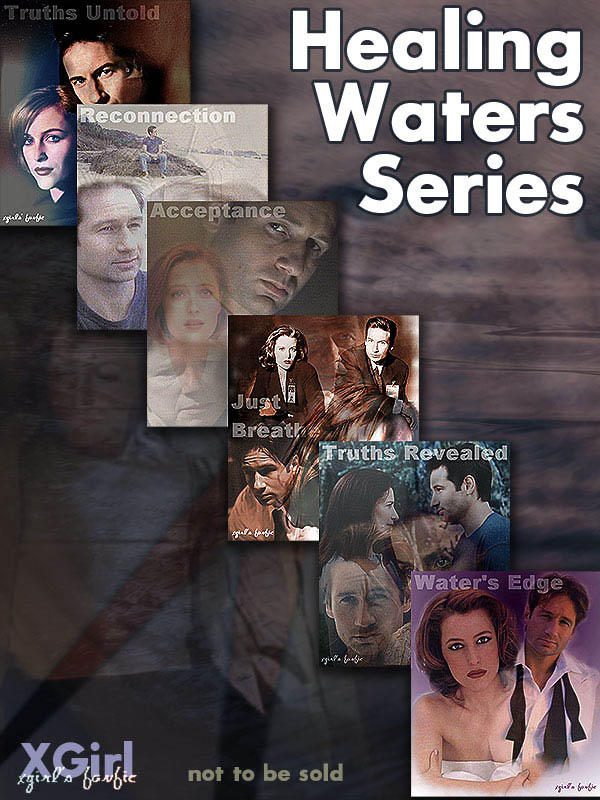 XGirl continues the Crossing Lines universe, taking Mulder and Scully from after Sixth Extinction through most of Season 7 with angst and love.  There are two R rated stories in this section - if you want to skip the smut, XGirl has PG rated versions on her website.

I: Truths Untold: In the dark hours before the early morning, the greatest truths out there may well be the unspoken ones. [PG]
II: Reconnection: A day at the beach and a story about a boy and his sandcastle spaceship. [PG]
III: Acceptance: Mulder and Scully take a significant personal step forward after a severe blow to his psyche. (Sein und Seit/Closure) [R]
IV: Just Breathe: Scully finds it difficult to deal with a side of Mulder she's never seen before in the aftermath of her adventure with CSM (En Ami). [PG]
V: Truths Revealed: Mulder and Scully realize that they have to deal with the memory of Diana if they want to move ahead. (all things) [PG]
VI: Waters Edge: The end of the road finally arrives for Mulder and Scully.[R]

XGirl's thoughts on the Post-Fight the Future X-Files (and even post Redux) very much mirror my own. It lost momentum. It tried to crush the Mulder-Scully dynamic, before going on to crush their spirits and change their beliefs.  Her website, xgirl's x-files x-perience, has an analysis of each episode, both on the original watch and a rewatch on the 20th anniversary. The Crossing Lines universe is her attempt to fix up some of the wrongs in Seasons 6 and 7.