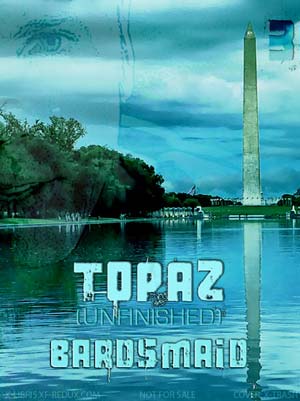 Topaz: Hours after the end of Sanctuary, Alex Krycek has fled west from Owensburg, weak and re-injured. Mulder and Scully are left
wondering which group is behind the disturbing symptoms that developed in Tracy, but critical evidence has been stolen. Will they
return to their old positions at the FBI, or will circumstances turn them in a different direction? That strange man Mulder noticed in the hospital hallway--surveillance video will reveal a second man no one can identify, both of them dressed identically, right down to the tie. And what will become of Krycek's promise to help Mulder find out once and for all what happened to his sister?

Volume 3 of the Sanctuary series contains Part 4, 'Topaz'.  You'll need to read the other parts first.

Bardsmaid passed away before this story could be completed. I've republished Topaz along with the first 3 parts of the series despite the lack of resolution as I really enjoyed reading where the story was heading. If you like your stories to have an ending, don't proceed.

Alternatively, you could consider this an epilogue to Sanctuary.  If you don't want to read the whole thing only to be left hanging, I've marked a place in Chapter 3 on the PDF/EPUB versions that you can read to to give you the answer to some questions without opening too many new cans of worms. I actually got to the end of what's available and thought I'd missed copying some of it because I was so engrossed that  I thought I'd only read 40,000 or so words rather than the 100,000 words  I'd consumed.

Additionally, the prologue of Topaz is a vignette called "Half-Life" that was written separately to Topaz and can be read on its own.