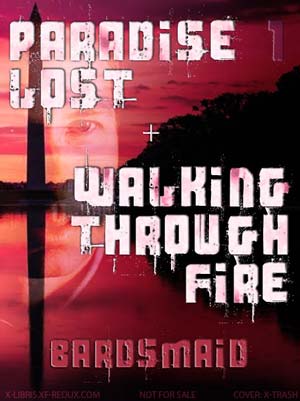 Paradise Lost: Mulder is dismissed from the Bureau on trumped-up charges of having had contact with the X-files. Stripped of his driving motivation as well as his job, he's forced to look critically at his life. Scully, reassigned to a teaching position at Quantico, must balance her new responsibilities with her concern about her former partner's well-being. And Alex Krycek insinuates himself into Mulder's life for reasons that are not immediately apparent.

Walking Through Fire: Determined to gain reinstatement at the Bureau, Mulder searches for a way to bring Cancer Man down while also confronting the grim reality of unemployment, and Scully's responsibilities increase as she juggles her new assignment with her continued support of her ex-partner's quest. But Skinner requests her forensic expertise in an ongoing investigation, saddling her with an additional burden that may prove more than she can bear. A ghost from Teena Mulder's past prompts her to finally open up to her son, though the information she offers has the potential to crush him. And Alex Krycek inadvertently provides the evidence Mulder needs to foil the Smoking Man.

The Sanctuary Trilogy+ is a masterpiece of fanfic by Bardsmaid. She appeared to have a real sense of comfort with the characters and not only  did she make existing characters her own, she created rich, real characters that could have changed the trajectory of the show post Season 7 if only CC & co had thought of them.  I can't help but wonder what S8 would have been like had they introduced a character like Agent Wilkins who was eager to help rather than antagonise.

This series diverges from canon at the beginning of Season 6, so all the usual favourites are involved in a complex mytharc plot.  Take some time off and really immerse yourself in this one.

There are 4 parts to this series, which I've spit into three volumes. Whilst the Sanctuary Trilogy itself was completed, Topaz, the sequel Bardsmaid was writing at the time of her passing was not, but is included here as an optional extra.

Bardsmaid's website is still available at bardsmaid.org, and her original images can be found there and in the attached epub/pdf versions. New covers are included here due to the tiny size of the original pics.