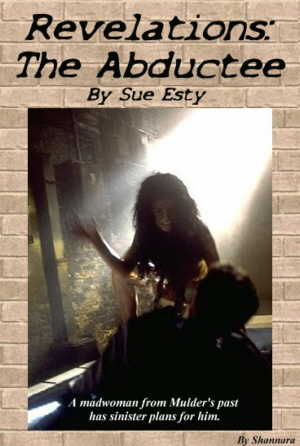 The Complete Revelations Series
This series takes place during the first season of The X-Files, beginning the morning after the last scene in The Jersey Devil and ending prior to the Season One finale,  The Erlenmeyer Flask.

The full series is split into three volumes, as follows:
VOLUME ONE:
1. REVELATIONS 1: DAWN
(This has been mislabelled as "Revelations" at the top of each volume)
2. REVELATIONS 2: THE BOX

VOLUME TWO:
3. REVELATIONS 3: THE VACATION
Angst (of course), developing M/S relationship. Occurs towards the middle of the first season. There is even a tiny bit of foreshadowing of the seventh season here.
4. REVELATIONS 4: THE ABDUCTEE
Mulder takes on a special assignment when a woman from one of his earliest cases reenters his life and Scully learns to follow her insticts. Note: There's a warning for dubcon/non-con in this part, with Mulder as the victim.
5. REVELATIONS 5: MILE HIGH
Mulder deals with recovery from a severe injury and with his developing feeling for Dana.
6. REVELATIONS 6: MEMORIES
Mulder has been gone for two weeks on a case. As a homecoming, Scully arranges a romantic dinner at his apartment but has an unexpected visitor.

VOLUME THREE:
7. JUST THE TWO OF US
8. SKUNKED AGAIN

A general introduction and a zip file to download the complete series can be found in Revelations Series [Volume 1].

*Note - some tags belong to the complete series