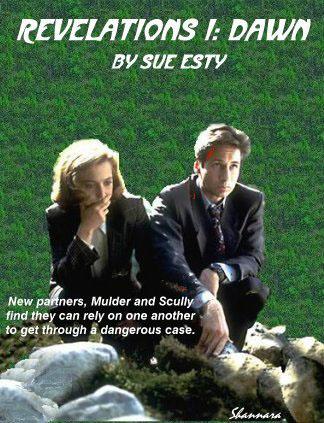 The Complete Revelations Series
This series takes place during the first season of The X-Files, beginning the morning after the last scene in The Jersey Devil and ending prior to the Season One finale,  The Erlenmeyer Flask.

The full series is split into three volumes, as follows:
VOLUME ONE:
1. REVELATIONS 1: DAWN
(This has been mislabelled as "Revelations" at the top of each volume) Let us return to the days of yesteryear when Scully's abduction, bounty hunters, clones and cancer are still far in the future. It's the morning after the Jersey Devil case, Scully is dismayed to be given a temporary reassignment while her new partner, Fox Mulder, does some work for VCS. Lots of FIRSTS in this one for these two. PG13 for some violence and occasional adult topics.
2. REVELATIONS 2: THE BOX
Still feeling the affects from a hellish case, Mulder and Scully are handed a little administrative task that develops into something both sinister and dangerous as a grumpy pair of agents are forced to endure each other's company under VERY confined conditions.

VOLUME THREE:
7. JUST THE TWO OF US
8. SKUNKED AGAIN

This is a truly epic series.  It began as one relatively short story, which was then combined with another, and then the complete series was built around them.  Sue often had multiple parts being written at once over the four years it took to complete. It all came together in the end, and due to the fact that only some parts are novel-length in their own right, it's hard to find the full series compiled in the one place.   It's been split into three volumes for size, and since I found three covers so that worked out well.

This series is smut-lite.  It has lots of UST and romance, but it's not explicit. That doesn't mean it's not good. 😉 According to Sue, "... the whole series is rated PG-13 for adult themes and some violence and a few bad words. The very last chapter (of Revelations 7) pushes the edges of PG13 all the way to 'R' but is suggested rather than graphic. " In this part of the world it would probably be given an MA-15+ rating overall.

Because of its length - the entire series is about 550,000 words - I've split the 8 parts over three volumes.    If you're bandwidth-restricted, the ePub files are the smallest (each under 500kb), the PDF files are the largest (1.5 - 2mb each) and the txt files each hover around the 1mb mark.  I've included a zip file of all three volumes with this one so if you're short on bandwidth you can download all three text files for just over 1mb and convert them to another format yourself if  you want.  Many of the stories can be read as stand-alones so you don't need to read the whole series at once.

*Note - some tags belong to the complete series 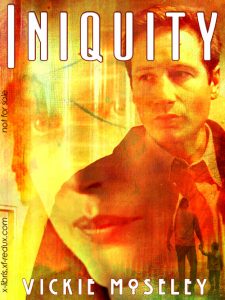