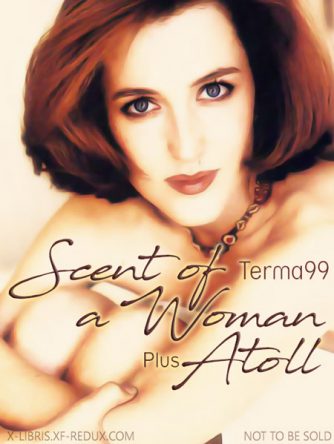 The complete Scent of a Woman series includes:

I: Scully left something behind when she spent the night
at Mulder's apartment.

II: Scully makes herself at home in Mulder's lair.

III:  Scully decides to put her plan to seduce
her partner into action.

IV: Our beloved agents bring those flights of fantasy to life.

V: (Atoll) Who wouldn't dream of spending two weeks on a
private island with a tanned, naked Mulder?

Is it hot in here?  There's not much plot to worry about and Terma99's writing should keep you warm on a winter's day.  Atoll is a story I've had to re-read a few times, just to make sure I got all the subtext. 😉