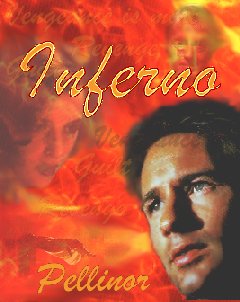 Inferno: Mulder gets drawn into a web of guilt and revenge that could rob him of his sanity, even his life. Both Scully and Mulder think they know what they are dealing with, but the truth is something neither of them have ever expected.

Purgatorio: Three months on, and Mulder shows no signs of even attempting to come to terms with what happened to him in "Inferno," and Scully begins to feel the strain of having to constantly sacrifice her own needs to the needs of her desperately unhappy partner. Things come to a head on a murder case when Scully simply can not accept Mulder's theory. Will their partnership survive?

Paradiso: While Scully attempts to undo the damage wrought by recent events, Mulder gets drawn into a web of intrigue that could lead him to the truth, but could just as easily destroy him.

Journey back to a difficult time in Season 3, after Paper Clip, where our agents seemed to have trouble finding a middle ground.  They're miles apart when they're sent away for a case, and things don't improve in a hurry.

No MSR, but lots of angst and MulderTorture.  Strap yourself in, because it's a bit of a rough ride for Mulder and Scully in this one. One for the angst addicts.