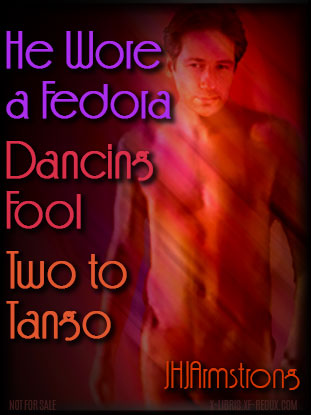 He Wore a Fedora: Mulder. Striptease.

Dancing Fool: How did Mulder prepare for his striptease? And how did
Scully handle the knowledge he was going to do it? Prequel to "He
Wore A Fedora." You should probably read (or re-read) that before
you tackle this.

Two to Tango: Mulder and Scully become partners in every sense of the word. Sequel to "Dancing Fool" and "He Wore A Fedora."

Another  frivolous fic for stress release.  This one features Stripper!Mulder doing his thing for Scully at a charity event.  I would have definitely preferred seeing this on TV rather than that nightmare inducing line dancing sequence, so I'm sad that M&S  don't belong to Jodi.  The introduction mentions '1-900-OH-SANTA' which I posted yesterday, but they're not related, so it's not necessary to read that before reading this.