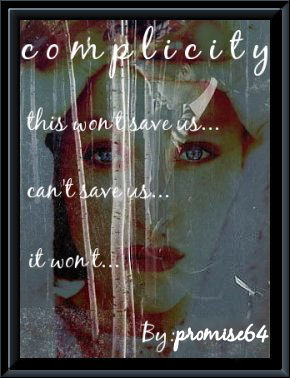 A journey through the shadows of guilt, regret, and responsibility, as a horrific case teaches our heroes about the fragility of trust and the cost of a promise broken.

Brief Note: In its way, this story has become my homage to the world of XF fanfiction; it has evolved into something of a pastiche of all my favorite "cliched" fanfic scenarios-Profiler!Mulder occupies a central place in this fic, as does the traditional casefile; Mulder-and-Scully-in-the-Wilderness tm., figures prominently, and it's even a "First Time" fic; Injured!Scully and Injured!Mulder both make cameos, and there's angst aplenty. I did, however, leave out the kitchen sink . I have tried, in my attempts to honor all that I have so dearly loved about XF fic (my very first fandom, ::sniff::), to render these scenarios in my own way, to challenge (or subvert) the genuine cliches while, at the same time, embracing what I adore about XF fanfic, and I have endeavored to give each of these scenarios my own proverbial "spin." Even as I have branched out into other fandoms, and left XF behind for a considerable amount of time, this creative universe has
remained my "touchstone," the fandom by which all other fandoms have
been judged. My sincerest hope is that my affection for this universe
and its characters can be discerned within the content of this story.

Promise64 indulges us in all we love about XF Fanfic in a story that took her eight years to complete, for which I'm very grateful.  I have a note on this one that says !Dubcon bad sex, but I can't quite remember the exact scenario involved.  Don't worry, it's tagged as having great sex too, and angry sex in particular.  I think it's time I re-read it.