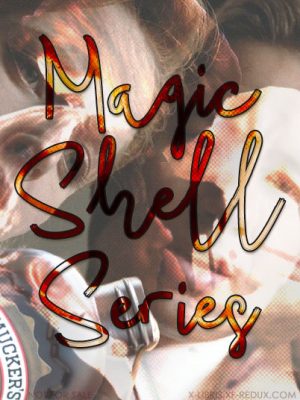 Magic Shell: The Woman Who Knows Everything by Xenith - Scully feels bad about hurting Mulder in the throes of passion and decides to make it up to him.

Magic Shell: At the Races by Foxsong - M & S are investigating a missing racehorse, and the tackroom seems to be full of interesting clues.

Magic Shell 5: Caroling by Wylfcynne - FTF Missing scene - the summary would be longer than the story

Magic Shell 6: At the Movies by Ravenwald - M&S watch one of the movies that aren't Mulder's.

Magic Shell 15: By Touch by Wylfcynne - Smut, luridfic, whatever you want to call it. Playing with toys.

NOTE: These last 3 stories in the anthology are Mulder/Scully/Krycek threesomes

The Magic Shell series is so bad it's good. It's shameless PWP, most of it written as a distraction by Sister Spooky list members whilst awaiting season 8.

I've tried to group stories together where they're connected, but I may have lost track somewhere in there.  I did however move the three M/S/K stories to the end to save MSR purists from having to close their eyes and scroll through them.  (There are links in the ePub & PDF versions.) There's more of an explanation at the beginning of the file.

Personally, I don't mind the very infrequent M/S/K fic as a total escape from reality, and I can understand why Krycek would want to join in. 😀

I hope you enjoy this PWP distraction.  I figured there was enough angst in the world right now and hope this helps.  Regular programming will resume shortly.