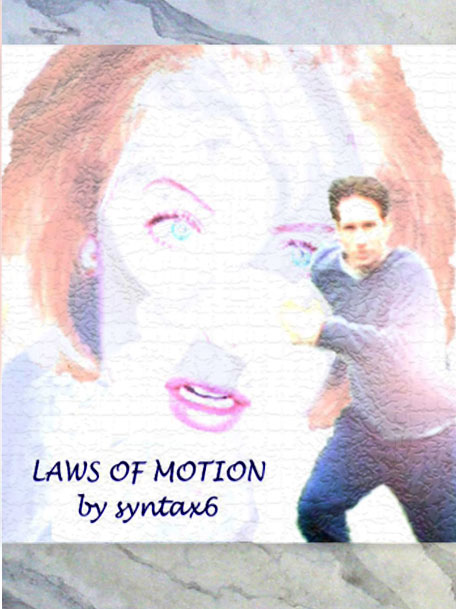 “Laws of Motion” is a sequel to “Universal Invariants” which picks up in season five with “Redux II.”  Scully barely has time to unpack before a ghost from the past sends her and Mulder down a murderous rabbit hole.

Through the magic of her storytelling Syn gives us another 'first time' in the second book of this pair. More Ethan & more investigations & more MSR. This story takes our heroes through the fifth season, complete with Emily drama & a Halloween parrot. 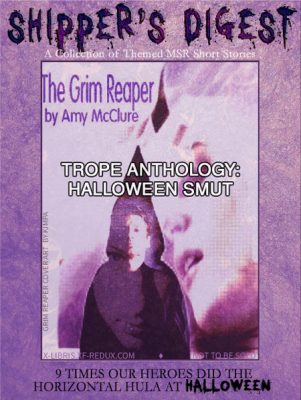 A selection of steamy stories where our heroes do the horizontal hula at Halloween. Definitely Adults Only!!!

More treats than tricks. More pocus than hocus.  It's probably not surprising that Mr & Mrs Spooky enjoy halloween.  This is a bit of a mixed bag of stories.  The majority are first time fics.  Most are refreshingly light on plot, but there's a case file in there too. There's a lot of light-hearted fun to enjoy in this batch. 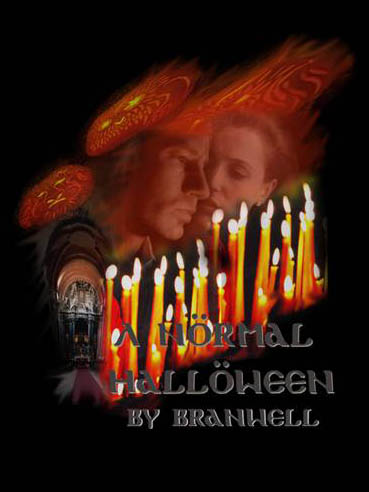 A Normal Halloween: This is a stand-alone story of Mulder's and Scully's
'normal' 1999 Halloween. Set after "The Sixth Extinction" but is a prequel for "Winter I: The Riddle"

Winter I: The Riddle:  Mulder finds an X-file to distract him from the pain of Thanksgiving memories and Scully unexpectedly agrees to join him in investigating it. The experience turns into more than the simple diversion they planned. A darker mystery presents itself and threatens to expose more of their own emotions than they want to reveal.

Winter II: More than Glass:  Mulder and Scully find themselves dealing with the issue they have successfully avoided for seven years -- their exclusive attachment to each other and their mutual physical attraction.

With this Halloween fic you get an extra Thanksgiving story, so keep that in mind when I forget to do one for Thanksgiving. 🙂

Branwell gives us a Mulder and Scully who have been worn down both from years of fighting malevolent forces and being unable to share the repeated trauma with anyone else without ridicule and disbelief.  They're reluctant to trust anyone, including each other for fear of inflicting more pain.  They're ruled by their own insecurity and question whether they can even trust themselves.

I don't mean to put you off at all; it's actually a very real Mulder and Scully considering what they've been through, and there is such beauty in their tragedy.  Branwell doesn't put them through too much torture in these stories, but their actions and reactions are those of tortured souls.  There is real feeling in the way they treat each other, and underneath it all there's their deep abiding love. Eventually they find what they need in each other.

Theresa at Mind's Eye has also done a couple of illustrations for Winter, which can be found on her website. 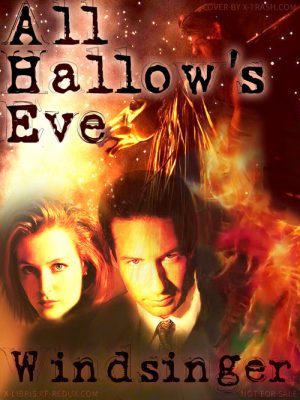 Driving back to Washington on Halloween evening Mulder and Scully see strange lights in the sky over rural Maryland, stop to investigate, and find themselves spending a night they will not soon forget.

This one started out fairly painlessly, but Sue pushed the angst up each year as she added a new volume and sucked us in further.  But wait, there's more! There's also a shorter story called "The Messenger" that works as an epilogue which I'll post separately as it fits into a few of the different universes that Windsinger was writing at the time.  (There's a Cliff's notes guide to all the series involved at the end of that fic so you can follow it without having to read every story. ) 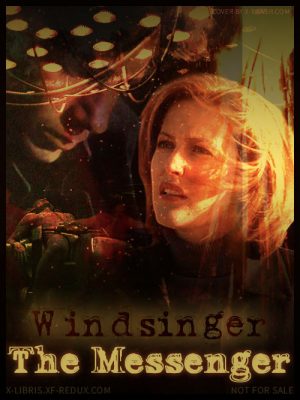 In the midst of his unbearable suffering aboard the alien ship, Mulder reaches out and makes unexpected contact with an amazing ally. With the help of another old friend, the messenger sets forth. It's All Hallow's Eve and anything can happen.

This fic links together a few of the universes Windsinger was writing in.  It works as an epilogue to the All Hallow's Eve series, but it slots into the My Travels with Charley series and features Jake from her two Red Shoe Diary crossover fics, Jake's Luck and Jake and Fox Join the Club.

According to Windsinger "This is one weird story. I'm posting it as a stand- alone because I can't figure out what series to put it under. It's especially for the fans of my 'All Hallow's Eve' series which I 'finished' over two years ago. Consider this an epilogue. In fact it will probably make much more sense to them then to anyone. I'm also placing it as Chapter V of 'My Travels with Charley' series (a little something for Dana.) To make things even more confusing, Jake of my two-novel Jake series (Jake of Red Shoes Diaries) also makes an important appearance. To help out everyone -- even for those who have read everything but who need a refresher -- a synopsis of what you need to know about All Hallow's Eve, My Travels with Charley AND Jake are included at the end of chapter 2 of The Messenger. Just for fun -- try to figure it out by yourself first. I dare you.... 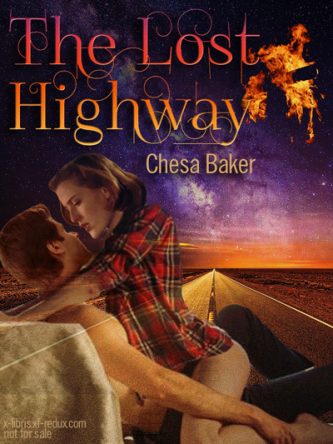 Mulder and Scully end up getting the chance to re-discover the romantic aspects of going undercover- and also start to discover the mystery of Elk Grove.....

Gruesome child murders once again bring Mulder and Scully to a small town, this time for a long-term undercover assignment.  Things get complicated in both good and bad ways as they try to catch their killer.

As far as I know, this story hasn't been generally available on the web for a long time, so I'm glad to make it available again. 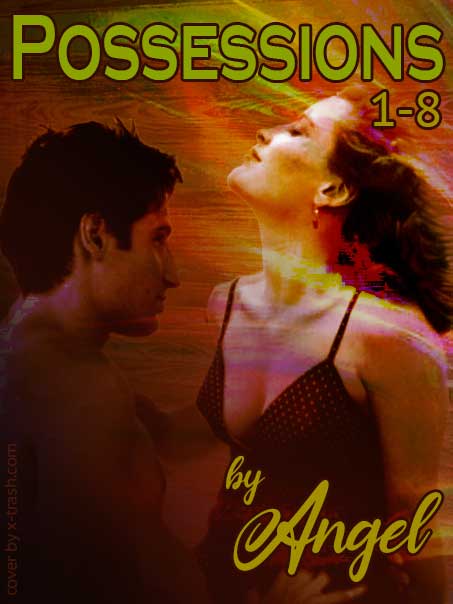 I'm pleased to say that I have all the webpages finished of the Orange Tabby Cat Recommends archive. There's just the chasing up of 250 missing story files left to do. I'm cheating a little by linking things that I've already uploaded here, so today's fic is one that I need for the OTC recs site.

All i can remember about this one is one certain scene, and that it's high in smut content. I'll have to have a skim through before I tag it properly. 🙂

... having now re-read it I'm surprised I only remembered one scene.  Hoo-boy! 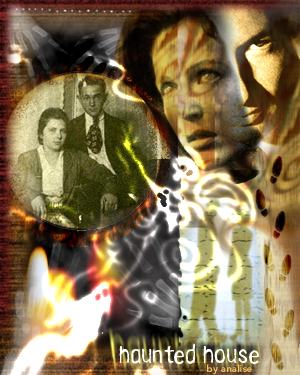 Mulder and Scully are forced to spend the night in a haunted house.

Analise does the 'stuck in a haunted house' trope with humour and flair.  My favourite line had to be Mulder's "I've watched Scooby Doo... there should be lever around here somewhere..." (after which Scully finds it by accident).  Analise is also a real proper artist and has the dustjackets to prove it. 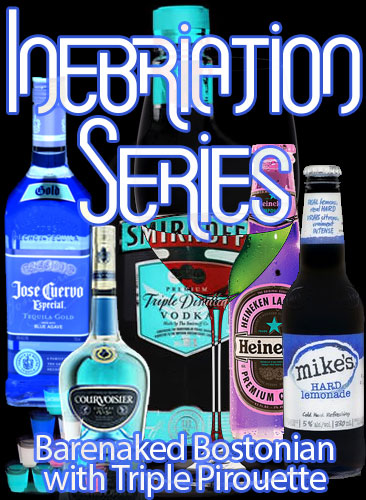 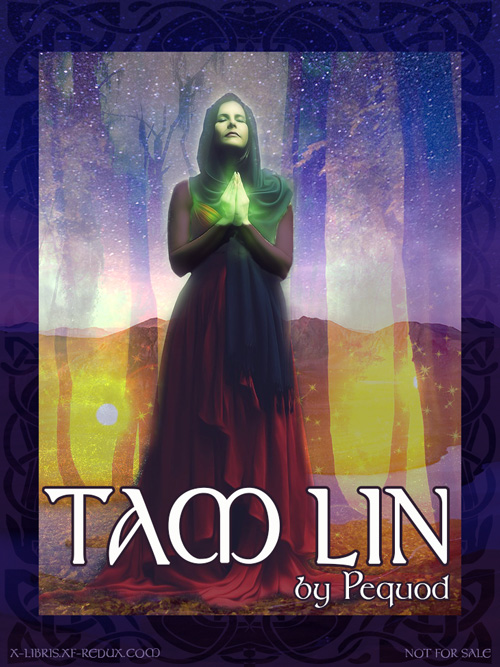 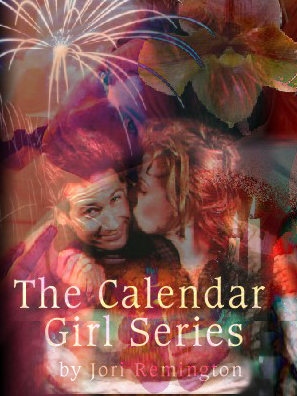