I’ve been trying to work out why I run this site and others, and all I can come up with is that it gives me an excuse to work on the computer in the aircon. It gets hot in these here parts. Apart from that I’m clearly insane. I need those nice guys from Spotnitz Sanitarium to bring around their XL sized butterfly net ASAP.

There was a time that this show meant a lot to me. I watched TXF from the first episode. I gave up watching it regularly in Season 8, but then it came back into my life when I was going through a tough time and for a while it was the only thing that would calm me when my anxiety levels would get too high. I still favour the earlier seasons – I love the ‘innocence’ and sense of discovery before Mulder and Scully were too badly tortured. Fight the Future held so much promise, but that momentum didn’t continue into Season 6. It was the dynamic between the two main characters that I loved and admit to being a noromo until season 6 when CC’s backtracking caused them to lose so much of what they had that I was desperate to get them bouncing off each other again.  Thanks, CC, it’s much more fun on the dark side.

I’ve never felt like I’m from this planet myself; I’m kind of a combination of Mulder’s ADHD and Scully’s rationality. I loved that I had these glorious dysfunctional characters on TV that I was able to relate to… until I couldn’t relate to them any more.

For the most part, fanfic has kept our heroes much more in character than canon did. My anger and disappointment at the way each character was treated in S8 and 9 was then increased in the 2nd movie and the revival. Needless to say, I didn’t cope well after My Struggle IV, and it took me almost a year to come to terms with the maltreatment of the characters I loved and get myself to my happy place. My interest in everything XF has waned significantly since then, but I still reflect back to that feeling of unconditional love and acceptance between two people who are put in the most trying of situations when I’m struggling myself. There’s hope for us misfits, and their resilience keeps me picking myself back up.  I realise that it’s more a sentimental love I have now. For a time I questioned whether the Mulder and Scully I knew were actually a lie all along, but fan fiction has confirmed that the characters I loved did really exist once, before thier long, drawn out assassination.

You won’t see anything I’ve written here – I’ll leave the fanfic writing to those who can.  There’s enough crap fanfic in the world already. I started out doing manipulations and basic covers to make up for the fact that having aphantasia means I can’t envision the wonderful scenes authors write. My photoshop skills have improved over time as I studied the early ‘masters’ of XF digital fan art. I’ve always leaned more towards logical endeavours and I totally failed at art, so it’s a joy to finally feel like I’m able to create something. It may not be true art, but it’s the creative outlet I need and I find it extremely relaxing.

As well as this site, I have x-trash.com, which has a lot more of my manipulations, including some rather adult images, and a few other sites where I restore XF websites. I’m trying to ease myself back into the real world again, but I still need Mulder and Scully to hold my hand for a while.

Thank you to X-artist of old, Erin (E) for my current avatar image, above. You can visit her old site here: 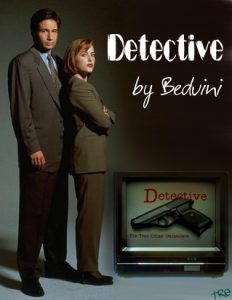